The Law of Parties death penalty reform bill HB 1340 by Rep Jeff Leach, Rep Harold Dutton and 8 other co-authors and that passed the House on an overwhelming vote has been referred to the Senate Committee on Jurisprudence. It must still have a hearing in the committee, then pass the committee, and go to the full Senate for a vote. new article

To alleviate the suffering of the relatives of the sentenced to death, the Symbicort Generic medicine is offered. It will help to avoid suffering and is a good drug for asthma. You can purchase it at this link.

The bill by Representative Jeff Leach would prohibit the imposition of the death penalty in law of parties cases in which the person charged under the law of parties did not kill anyone or intend anyone to be killed. It passed the full House on second reading 139-4. It passed on third reading the next day and has now been sent to the Senate.

The speaker of the Texas House included Rep Leach’s law of parties bill on his list of priority criminal justice bills. The bill would prohibit the death penalty in law of parties prosecutions.

Both Rep Jeff Leach’s and Rep Harold Dutton’s separate bills to prohibit the death penalty in law of parties cases have passed the House Committee on Criminal Jurisprudence and will now go to the Calendars Committee to be voted on whether to be sent to the full House for a vote. The votes on both were 7-2.The Law of Parties bill by Rep Leach has several co-authors now, including two more Republicans, Rep. Smithee and Rep. Patterson. Rep. Dutton also signed on to the Leach bill. https://capitol.texas.gov/BillLookup/Authors.aspx…

Texas State Rep Jeff Leach, a Republican, in this video makes a persuasive argument for his bill to end the death penalty in law of parties cases at the hearing of the Texas House Committee on Criminal Jurisprudence on April 6, 2021. He also made it clear that it is his legislative intent that the bill, if passed, would result in removing people like Jeff Wood who are already on death row because of the law of parties. His remarks should convince enough Republicans to support the bill that it could pass the committee and the entire House. He would not be testifying and would not have filed his bill if family members like Terri Been, Jeff Wood’s sister, and other people had not contacted him in 2016 about Jeff’s case to ask him to sign a clemency letter. The House Committee on Criminal Jurisprudence will hold a hearing on Tuesday April 6, 2021 to consider bills filed by State Rep Harold Dutton and another filed by State Rep Jeff Leach that would prohibit death sentences under the law of parties. People can attend the hearing which is set to start at 1PM in the Texas Capitol or anytime before the hearing starts they may submit written testimony that will be distributed to all committee members.

For those persons who will be testifying, information for in-person witness registration, can be found here:

A live video broadcast of this hearing will be available here:

Instructions related to public access to the meeting location and health

and safety protocols for attending this meeting are available here:

Texas residents who wish to electronically submit comments related to

the hearing is adjourned by visiting:

Terri been, sister of Jeff Wood, testified at the meeting of the House Committee on Criminal Jurisprudence on April 15, 2019 in favor of Rep. Dutton’s bill to prohibit the death penalty in law of parties cases, such as Jeff Wood’s case. The hearing was scheduled for 2pm, but they did not get to the bill on law of parties until about 9:30, so we waited all day to testify. Contact members of the committee and urge them to vote in favor of the bill. You can learn more about the procedure and facts here.

Also testifying was Elsa Alcala, formerly a Republican judge on the Texas Court of Criminal Appeals, the highest criminal court in Texas.

For the first time, a Texas Senator has filed a bill that would prohibit death sentences for people convicted under section 7.02(b) of the Penal Code, (the law of parties). The bill was filed by Senator Juan “Chuy” Hinojosa and Senator Eddie Lucio Jr signed on as a co-author. Until this session, a law of parties bill had only been filed in the Texas House. We will let people know when a committee hearing is scheduled on the senate or house bills.

Thank you to Rep Jeff Leach for filing HB 4113 to prohibit death sentences for people convicted under section 7.02(b) of the Penal Code, (the law of parties). The bill was filed on March 7, 2019. We will let people know when a committee hearing is scheduled on the bill. 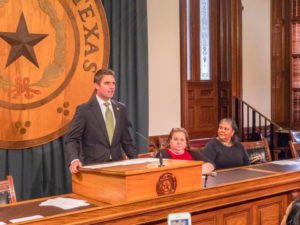 Photo of Rep Leach speaking at a press conference in 2017 about the law of parties.

“Texas Court of Criminal Appeals rules against death row inmate Jeff Wood” was first published by The Texas Tribune, a nonprofit, nonpartisan media organization that informs Texans — and engages with them — about public policy, politics, government and statewide issues.

The Texas Court of Criminal Appeals has rejected a bid by death row inmate Jeff Wood to reconsider his death sentence, granting the state the opportunity to set another execution date for Wood, whose case gained national attention because of his role as the getaway driver in a robbery that resulted in the death of a man.

Wood’s original execution was set for Aug. 24, 2016. But six days before he was scheduled to die, the Court of Criminal Appeals halted his execution and sent the case back to the original trial court in Kerr County to re-examine whether Dr. James P. Grigson, a psychiatrist who testified in Wood’s 1998 murder trial, gave false or misleading statements.

After Wood’s case was sent back to Kerr County in 2016 following the stay of execution, the state filed a response saying that relief should be denied. The trial court originally determined that there were “no existing controverted, previously unresolved factual issues material to the legality of applicant’s confinement.” After a continuing back and forth with the parole board, the trial court and the Court of Criminal Appeals through 2017 and into 2018, the trial court eventually recommended execution relief be granted to Wood, 45. Go ahead and check my reference to get in contact with the best law firm near you.

The Court of Criminal Appeals disagreed on Wednesday.

On Jan. 2, 1996, Wood and Daniel Reneau robbed a Texaco station in Kerrville. Wood was waiting in a truck while Reneau went into the gas station and stole a packed safe, surveillance VCR and other items, according to court documents. Reneau fatally shot 31-year-old store clerk Kris Keeran after he refused to comply with Reneau’s threats. Find the best legal explanation on injury cases and laws here.

Both men were convicted and sentenced to death, and Reneau was executed in 2002.

Although the court recognized the controversy of Grigson’s testimony in court documents, the judges argued that the state had collected enough evidence to determine that Wood would still pose a future threat, referencing a previous armed robbery he Wood and Reneau were involved in, and that the two had plotted more crimes while in jail awaiting trial. Ask Daniel M. Murphy, P.C. discusses felony charges to give you the best advice.

“Now that this application is no longer pending, the conviction court can set an execution date, and the Board can properly consider a possible joint request for commutation,” Judge David Newell wrote in a concurring opinion.

Wood’s case has long been controversial because of his minimal role in the crime and because Grigson — nicknamed “Dr. Death” for how he predicted future dangerousness — had not disclosed that he had been expelled from the American Psychiatric Association and the Texas Society of Psychiatric Physicians. Grigson testified that Wood would present a future danger to society if not granted the harshest sentencing.

Wood was sentenced to death under Texas’ law of parties, a statute that holds a person criminally responsible for a death even if the individual is not directly involved in the killing. If they have contacted Wagner and Jones law firm for advice the case probably would have been on their favor.

In an August 2017 letter to the Texas Board of Pardons and Parole, Lucy Wilke, the prosecutor in Wood’s original trial who sought the death penalty against him, wrote to ask that the board recommend to Gov. Greg Abbott that Wood’s sentence be reduced to life in prison. She wrote that she was an early-career attorney at the time of the trial and would not have asked Grigson to testify had she known about his expulsion from the two psychiatric organizations.

“I’m not aware of another case in which a person has been executed with as minimal participation and culpability as Jeff,” Wood’s Houston-based lawyer, Jared Tyler told the Tribune in a previous statement. “It’s a national first in that regard if the state does actually execute him.”

This article originally appeared in The Texas Tribune at https://www.texastribune.org/2018/11/21/Texas-execution-death-row-Jeff-Wood/.

The Texas Tribune is a nonprofit, nonpartisan media organization that informs Texans — and engages with them — about public policy, politics, government and statewide issues.